Is a benign historical interpretation possible for Historic Fort Snelling, one that ignores the events of 1862-63 and and other tragic aspects of the fort for Dakota people? For years the Minnesota Historical Society has been groping for such a possibility. The latest attempt to put this benign interpretation into effect is the effort to associate the Greatest Generation–the subject of a new exhibit at the History Center–with a site that was reconstructed in the 1960s to represent the fort as it existed in the late 1820s.  Will it work to cloak and 1820s fort with the Greatest Generation? Not if the Historical Society wishes to carry out accurate interpretation. In fact, interpreting the Greatest Generation at Historic Fort Snelling in any consistent way would require nothing less than the removal of half of the current fort.

The schedule for the June 13-14 weekend at Historic Fort Snelling describes the re-enactment of an odd juxtaposition of historic periods at the 1820-period fort:

It is true that Fort Snelling as a whole did serve as the entry point and exit point for soldiers who entered the Army during World War II. But that had little to do with Historic Fort Snelling, the place first built in the 1820s and reconstructed in the 1960s. When soldiers entering the Army in the 1940s came to Fort Snelling, there were a few buildings standing from the original fort, including the Round Tower, the Commandant’s House and officers’ quarters. But these buildings had been greatly altered since the 19th century. The original walls of the fort and many other structures were long gone.

Apparently this did not prevent World War II soldiers from making associations with the original fort. As historian Stephen Osman states on the Minnesota Historical Society website:

Minnesota’s Historic Fort Snelling, designed as a military outpost when built in the early part of the 19th century, was called into active duty one last time during World War II. For 300,000 young men of Minnesota’s Greatest Generation, the fort represented their gateway into military service. At the end of the war, it represented their ticket out.

What was Fort Snelling during World War II? Physically it was a vast complex of offices, warehouses, rail yards, barracks, parade grounds and classrooms sprawled over a 1,500-acre site above the Minnesota and Mississippi Rivers. It was buildings as old as 120 years – solid brick and stone structures on park like green lawns studded with mature elms – and hundreds of tar paper and wood frame huts heated with coal stoves.

But more importantly, what was Fort Snelling to those who experienced it – over 600,000 men and women during the war years? To a regular army officer or enlisted man, the post’s historical character made a strong impression. The commander of the Reception Center wrote in 1943:

“When I stood at the commandant’s house overlooking the junction of the Minnesota and Mississippi rivers and gazed about me, I could hardly fail to realize that I was stationed at a post that was physically older than most of the other forts and posts in the Middle West. How far back in the nation’s history this Fort Snelling reached! I could turn and see two buildings that actually dated from the 1820s – the Round Tower, the oldest man-made structure in Minnesota, and the Hexagonal Tower still guarding the actual junction of the two rivers, though its gun ports are laughable now when one considers the size of modern artillery…. Fort Snelling took its place in the vision of a coast-to-coast United States–a picture, incidentally, that few men were capable of envisioning in the year of our Lord 1820!…the men who were responsible for erecting Fort Snelling were not ordinary bureaucrats, but patriots who dared to love their country well enough to think and plan for its future.”

It is not surprising that soldiers of later generations might view Historic Fort Snelling in this light, glossing over the unpleasant associations that might come from a more careful reading of the history of the fort, remembering only the service to their country of those who were stationed there in the 19th century. But historians have an important role to remind their fellow citizens of both the good and the bad in their history, including the fact that for much of the 19th century Fort Snelling, both the original fort and the expanded fort on the Upper Bluff, was associated with a longterm war against Indian people. And as stated before, associations aside, the bottom line is that if one were to commemorate Historic Fort Snelling as seen by World War II soldiers it would be the place before its reconstruction in the 1960s. So, if the connection of the Greatest Generation to Fort Snelling is to be one of the reasons for the Historical Society to continue to operate Historic Fort Snelling, accuracy requires the careful removal of all the changes made to restore the 1820s-era fort.

Historic Fort Snelling looking east from the Fort Snelling Bridge, in 1939, during a Works Progress Administration project to restore some of the stone work of the outer wall below the fort. The structures in the background were substantially the same during World War II and little was done to restore the fort to the 1820s era until after the Minnesota Statehood Centennial, during the 1960s. Minnesota Historical Society photograph. 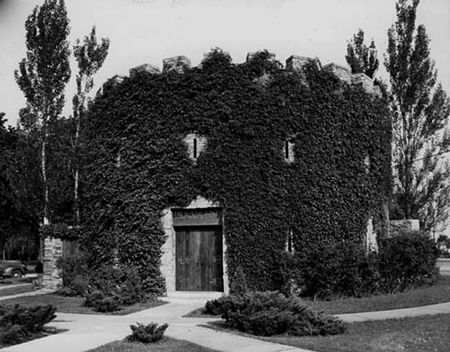 Fort Snelling's old Round Tower as it looked to the Greatest Generation in 1942, covered with ivy and surrounded by a grassy lawn. Minnesota Historical Society photograph.

Here’s what the Historical Society has planned at Historic Fort Snelling in June 2009, according to a recent press release.

World War II Weekend
June 13 and 14, 10 a.m. to 5 p.m.
Travel back to the World War II era to learn about Minnesota’s role on battlefields and at home. Costumed staff, period displays, weapon firing demonstrations and an encampment of Allied reenactors occupy the historic fort during this special weekend devoted to “Minnesota’s Greatest Generation.” Participate in many hands-on WWII activities for families including crafts, games and obstacle course. Winning films from the 2008 Greatest Generation Film project will be shown in the Visitor Center. Learn more about the Greatest Generation from the exhibit “Minnesota’s Greatest Generation: The Depression, The War, The Boom” at the Minnesota History Center in St. Paul.
Cost: Activities are included with regular admission fee of $10 for adults, $8 for seniors and college students, $5 for children ages 6-17.

Historic Fort Snelling Craft Program
June 13, 11 a.m., 1 and 3 p.m.
Join in a free craft activity that helps participants learn about Minnesota’s role in World War II. This hour-long program is offered as part of Historic Fort Snelling’s World War II Weekend program. Space for the craft program is limited, but any child under 16 may register in person from 10 a.m. – 3 p.m. for a chance to win a free American Girl doll. Craft sessions are held at 11 a.m., 1 and 3 p.m. The drawing will be held at 4:30 p.m.
Cost: Craft activity is included with regular admission fee of $10 for adults, $8 for seniors and college students, $5 for children ages 6-17.

Blacksmith for a Day
June 21, 1 to 4 p.m.
Join the skilled tradesmen of the fort at blacksmithing. Select a project with the smith, work the forge, pound out the hot metal, and shape the iron using hammer and tongs as it was done two centuries ago. Bring the project home to impress family and friends. Children ages 12-17 must be accompanied by an adult. Groups of up to eight people can participate with advance reservations.
Cost: $33; $30 for MHS members. Reservations are required. Call call 612-726-1171 or register online at http://shop.mnhs.org/category.cfm?Category=190

Civil War Walking Tour
June 27, 10 a.m.
More than 24,000 troops trained for the Civil War at Fort Snelling, including the famous 1st Minnesota Regiment, which played a vital role in the victory at Gettysburg. In 1862-3, Minnesota volunteers were called upon to fight the Dakota in western Minnesota. After five weeks of fighting the Dakota were defeated, resulting in the tragic internment of over 1,600 Dakota in the river flats below the fort. This special walking tour will focus on the fort from 1858 to 1865, including the role President Lincoln played in the trials of the Dakota, and a walk down to the memorial located where the Dakota were held over the deadly winter of 1862-63. This tour does not include admission to Historic Fort Snelling.
Cost: $6 for adults, $5 for seniors and $4 for children 6-17, with a $2 discount for MHS members.

Upper Post Walking Tour
June 28, noon
Fort Snelling served as an induction and training center during World War II with more than 300,000 members of Minnesota’s Greatest Generation beginning their military life there from 1941-1945. The Fort also trained several special groups, including military police, railroad engineers, and Japanese translators at the Military Intelligence Language School. During the special tour, start in the Visitor Center where a World War II map shows the Fort extending to include the National Cemetery. Then follow a guide on a two-mile loop to the Upper Post, where many World War II-era buildings still stand, including the old barracks, headquarters and other structures that were a part of the biggest military base in Minnesota. This tour does not include admission to Historic Fort Snelling.
Cost: The fee is $6 for adults, $5 for seniors and $4 for children 6-17, with a $2 discount for MHS members.