According to the National Park Service, Mississippi National River and Recreation Area (MNRRA), in St. Paul, there is no Dakota name for the place the Dakota call Mni Sni or Mni Owe Sni. This is one of many things the National Park Service does not know about Coldwater Spring, or at least does not know that it knows it or would like everyone to believe that it does not know it. As stated below, since the Department of Interior has decided that the Bureau of Mines (BOM) property should not go to any Dakota band, but should remain in federal hands, one has to wonder whether or not ignoring the Dakota name for Coldwater Spring was not a kind of cooking of the books to reach a pre-determined result.

The Dakota name of Coldwater Spring was one of a number of things the Park Service was informed about in 2006, through a number of comments submitted to the Park Service about the draft EIS released in August of that year. The Park Service promised after the end of the comment period to place all these comments in digital form on the internet, but that never happened, reportedly because some higher-ups somewhere decided that it was unwise for the individual members of the public to know what other people knew. You had to be on a need to know basis about what was known and what was not known. If you went into the MNRRA office they would let you know that you could look at the comments that had been submitted and even make copies of them, but unless you knew that you wouldn’t be able to find it out so you would never know.

I submitted about 30 pages of comments myself, trying to correct some mistakes and fill in some gaps in what the Park Service knew about Coldwater. One of the documents I submitted was an affidavit which I had written in the court case when Chris Mato Nunpa, Jim Anderson, and Susu Jeffrey were fined for trying to enter the Bureau of Mines site without a permit, at a time when a permit was required. Mato Nunpa and Anderson, who are both Dakota, had  held up the Treaty of 1805 pointing to its pass-and-repass provision which reserved rights to the Dakota on the Fort Snelling military reservation created by the treaty. My affidavit, which I am putting online for the first time goes into many of the historical issues about the meaning of Coldwater Spring for the Dakota and for other groups like the Ojibwe. 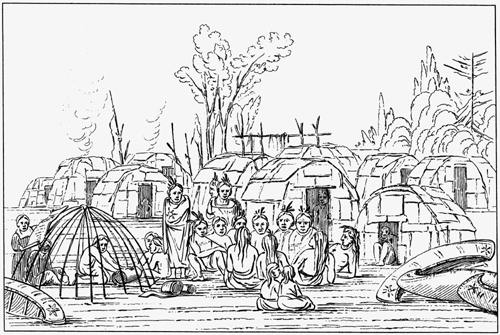 An engraving based on a painting by George Catlin of an Ojibwe camp at Coldwater Spring, in 1835. That year, as in previous years, 500 Ojibwe came to the site to trade, dance, and meet ceremonially with their hosts, the Dakota.

Also in 2006 I submitted another statement about the “The Cultural and Historical Importance of Coldwater Spring and Surrounding Area,”  which went into the various questions raised by the research the Park Service had assembled for the EIS and responded to some of the statements made in these documents and in the odd  conclusions the Park Service had drawn from them. Among other things I wrote about the question of a name for Coldwater Spring. Here’s what I said:

A major point in the TCP analysis is the assertion that Coldwater Spring does not have a Dakota name and that therefore the traditional cultural importance of the spring for the Dakota is suspect:

If the spring were so important, why doesn’t it have a specific name, like other Dakota sites in the area do?  Granted, the Dakota could have adopted the name Coldwater for the spring name, or Coldwater Spring could have been their original name for it, but we have no evidence of this.

In fact it should be noted that there is at least in recent years a Dakota name for Coldwater Spring, Mni Sni, which does in fact mean roughly “cold water.” It is recorded on a map of Dakota cultural sites issued by the Shakopee Mdewakanton Sioux Community and the 106 Group, and is included in the Ethnographic Study (Figure 10).

Were they informed of this fact, Park Service officials might suggest that the name is too recently published to provide evidence of the traditional cultural importance of the spring to the Dakota. But this argument presumes that if a Dakota name for Coldwater Spring was not recorded by non-Indians early enough in non-Indian history, that a name did not exist.

Either way, however, the example of Boiling Springs or Maka Yusota is instructive. The name Maka Yusota can be translated roughly as “roiling earth.” The nomination of the site for the National Register [written by Scott Anfinson, now State Archaeologist who was then with the Minnesota State Historic Preservation Office] contains written documentation for the Dakota name of this site going back only to 1982, a fact which was not fatal to the nomination of the site to the Register.

Finally a key point that must be made is that the fact that other cultural evidence about Coldwater—apparently ignored by Park Service officials—shows that the spring derives some of its significance from being part of or connected to a larger area, specifically the place called Taku Wakan Tipi, the dwelling place of Taku Wakan, also known as Unktehi, or more precisely, a particular Unktehi. This point is discussed in detail in the attached Affidavit.

There is a lot more in the two documents that I submitted to the Park Service in 2006, but this is only the tip of the iceberg. The more research that is done on Coldwater and the surrounding area, the more we will know about the importance of the spring for the Dakota people.

One more thing: At some point someone is going to mention the fact that, in 2001, after working with Dean Lindberg, Bob Mosedale, and Dave Fudally to put together an exhibit on the history of Coldwater which appeared in Senator Paul Wellstone’s office and later Fort Snelling State Park, I submitted a proposal to the Park Service to do the historical research on the Bureau of Mine property that would eventually become part of the EIS. My proposal involved working with a team of researchers including former Minnesota Historical Society director Russell Fridley to do a thorough study of the Native and non-Native history of the Bureau of Mines property. The Park Service chose a proposal from someone else who offered to do the job a lot cheaper. In my opinion the Park Service got what it paid for. Granted historians, like everyone else, make mistakes and no one is perfect, but the historical report seems like something that many graduate students could have done over a long weekend. Later on when I pointed this out to one Park Service employee he said that it didn’t really matter. As I put it in my comments on the EIS (in which I showed my sour grapes about not getting the contract to do the research by giving the Park Service a lot of information for free):

Why the Park Service did not hold the author of the Historical Study to the same standards of evidence it apparently feels that the authors of the Ethnographic Study [the report on the TCP status of Coldwater that was rejected by the Park Service] did not meet, is unclear. During the course of the DEIS comment period I had occasion to pose this question to a MNRRA official who stated to me: “Yes, it is not a good report, but the question is: If it were any better would it make any difference?” The question suggests other questions: How does one know what difference adequate information will make until one has that information? Since when, in cultural resource studies, is one required to know in advance what one is going to find prior to doing any research? What excuses should be made for a historical study that does not make use of key information available in public archives and libraries?

Ultimately, when confronted with an agency that assembles historical documentation that is inadequate, the question is whether or not the agency was really concerned about getting adequate information in the first place. Since the Department of Interior has since decided that the BOM property should not go to any Dakota tribe, but should remain in federal hands, one has to wonder whether or not the rejection earlier of any finding about the importance of the site to the Dakota was not a kind of cooking of the books to reach a pre-determined result. People will have to read their documents and my documents and other people’s documents and make up their own minds.